This is a regular post featuring an old picture of mine, usually from former travels, with a short description of the story behind the photo. 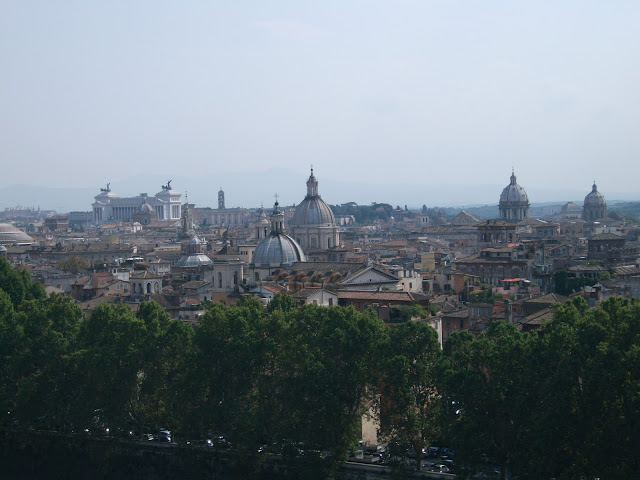 Rome
I lived and worked for just over two months as an au pair in a Roman suburb in the autumn of 2011. This picture was taken from the top of Castle Angelo over looking the city. It was a slightly strange time for me. I'd accepted the position in Rome as I finished my PGCE (post graduate certificate of education) which I had found difficult and had been quite unhappy in my final placement. I knew I didn't want to go straight into teaching, I felt bruised and confined at the thought of being stuck in a school with the sort of leadership I'd experienced.
Rome seemed like it would be a fantastic break. It really was. The family I worked for were generally lovely, the kids were fun and liked me and their mum treated me as a visiting friend. I only worked in the afternoon/ evenings when the children got home from school and one day at the weekend. I had most of the day to myself to explore Rome and the surrounding area.
I met up with some other au pairs fairly soon after I arrived and visited several of the big landmarks together. I also ate a lot of ice cream, read lots of books, watched lots of films.
It really did feel like a working holiday. I was only there for a couple of months, maybe it would've felt different if I'd stayed longer. I might have got to know some local people other than those the family knew, I might've learnt some Italian and seen more of Italy.
I'm not really sure if I have a point to my ramblings; It was a good time, it was temporary and definitely felt like it, I'm glad I did it but I'm perhaps I 'm too old to want to au pair again. I liked Rome and liked being there, I hope to visit again some day.
Posted by Helen at 3.4.13