Yarnbombing in the West Bank, Palestine

I spent last Sunday and Monday in and around Bethlehem in Palestine.
I have a lot of thoughts that I'm still processing from my visit there, mostly my feeling was simply how unfair a lot of life is for Palestinians.
My travel partner Kathleen and I had decided to try and buy all of the gifts and souvenirs we wanted from our trip in Palestine as we really wanted to support the local economy there.
In one shop where we stopped to buy pottery, we were befriended by a relative of the shop owner who was also a taxi driver, after finishing our shopping he gave us a tour around the area and in particular showed us the artworks and murals on the wall. He told us how quickly the wall had gone up, how recently many Israeli settlers houses had been built locally, how the checkpoints had meant so many local shops had closed down, how he couldn't get to Jerusalem just 8km away. He was still cheerful and glad to have us as visitors but I was nearly in tears with the injustice of it all.

One of the things he was particularly keen to show us was all the Banksy artwork on the wall and on local buildings. 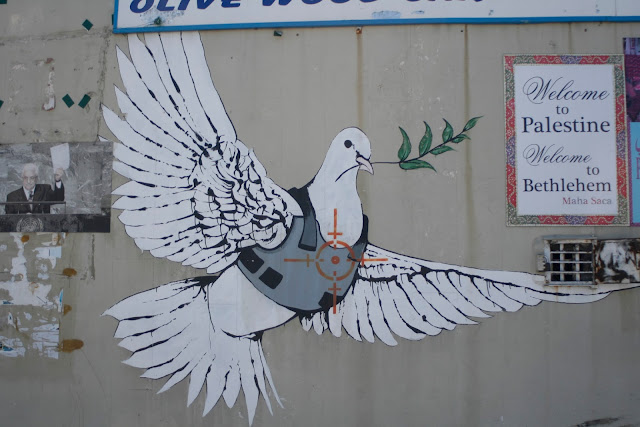 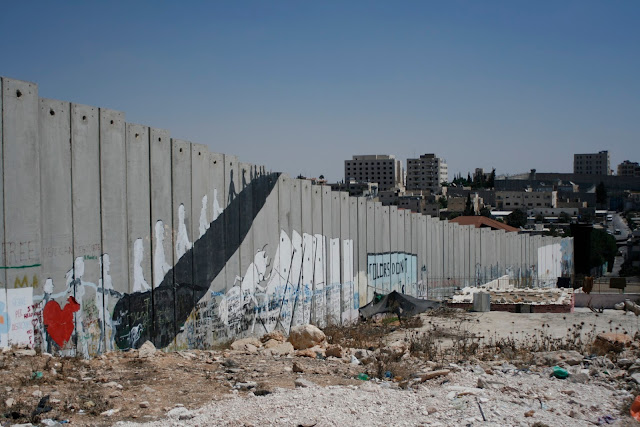 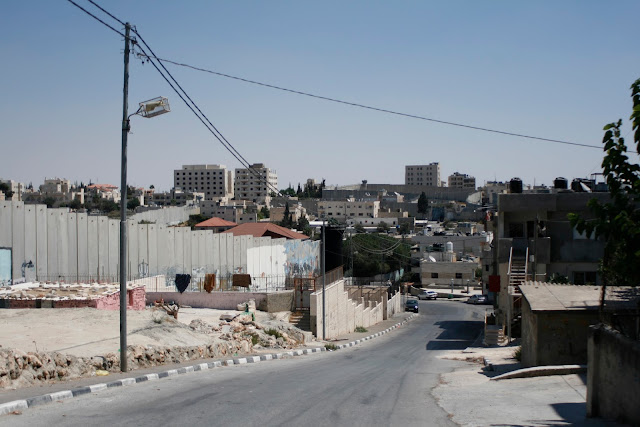 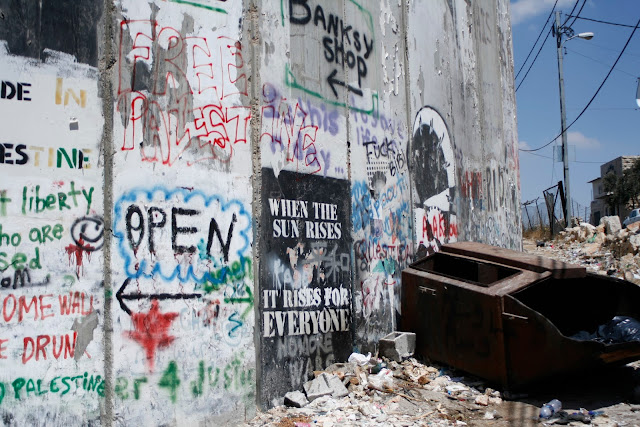 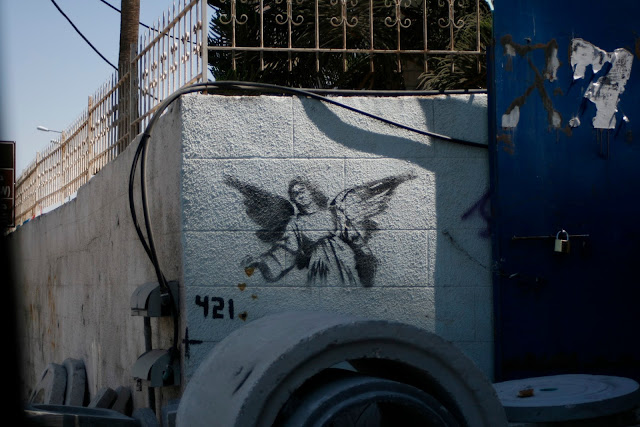 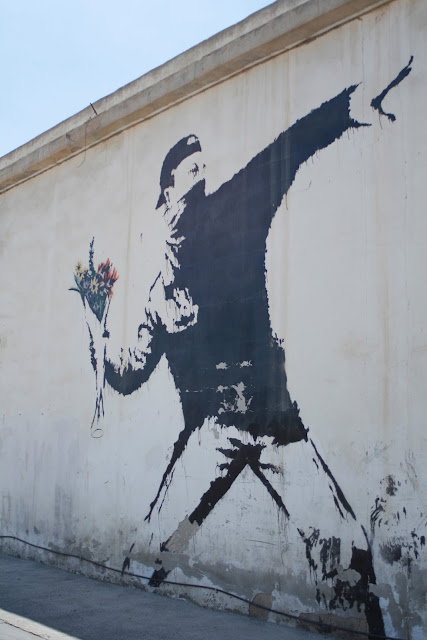 I think this flower thrower is one of my favourite pictures, it's on the side of a petrol station/garage and people driving by can see it. I've been sorting out things in my room and realised I'd previously bought a print of this picture without realising where it was or really knowing it was Banksy. 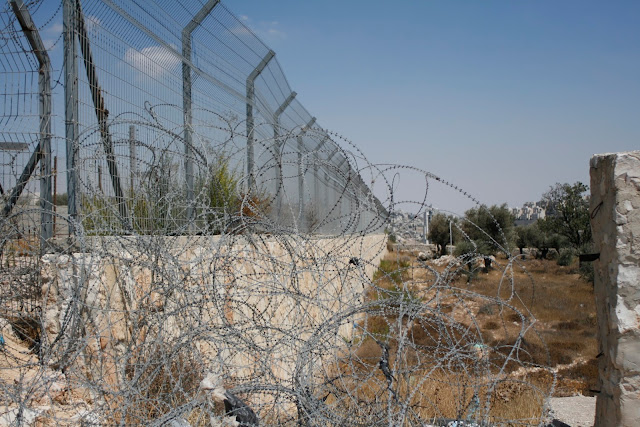 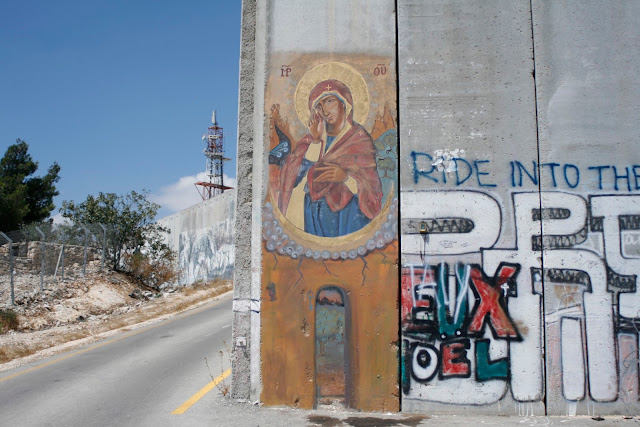 I wasn't really sure how to respond to being at the wall, our taxi driver was quite keen for us to buy some paint and have a go at painting on it ourselves but we're not really skilled in spray painting murals, I was going to just leave it until I remembered Meredith's Sheepish bloom drop. I'd participated in her Valentine's Sheepish heart yarnboming and really enjoyed leaving little hearts all around my neighbourhood and I'd thought about getting involved in this one but hadn't really had the chance while wondering around the middle east. 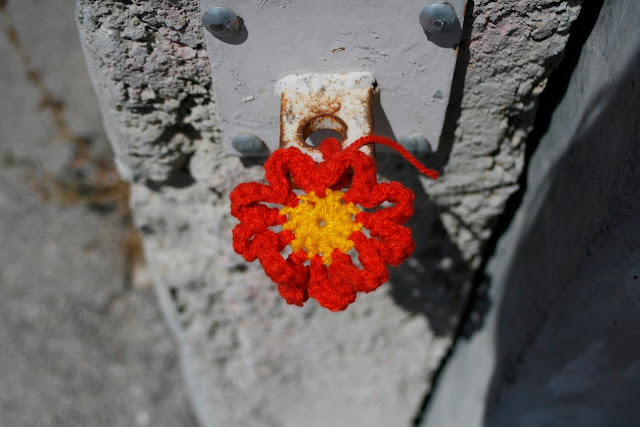 I'd brought a crochet hook and some yarn on the plane with me and sort of winged a pattern. I'd been sat next to an Orthodox Jewish, Israeli woman who'd been delighted to see me crocheting and helped me figure out a pattern and told me about the shawls she'd made for her ten granddaughters. Between the two of us we'd settled on this pattern and I'd made about 5 and then left them at the bottom of my bag to be carried through Israel, Jordan and then to Palestine. I finally felt it was time to use them. 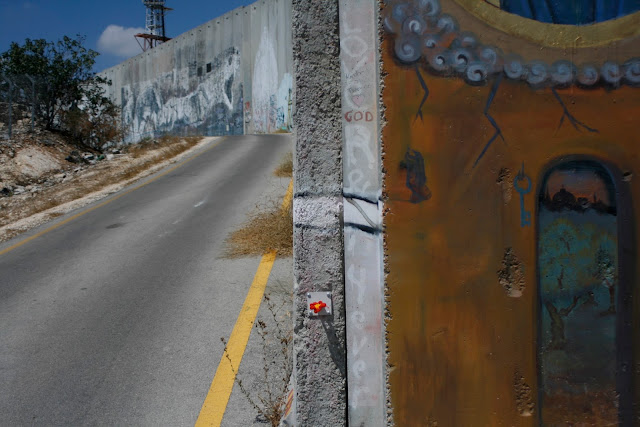 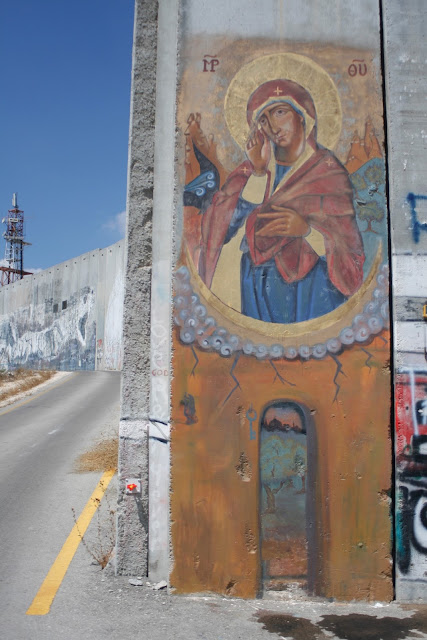 I know this is a bit different from what I usually post and a bit sensitive. I don't feel I know a lot about Israel or Palestine really and I would definitely value any comments, questions and opinions.
Posted by Helen at 12.9.13