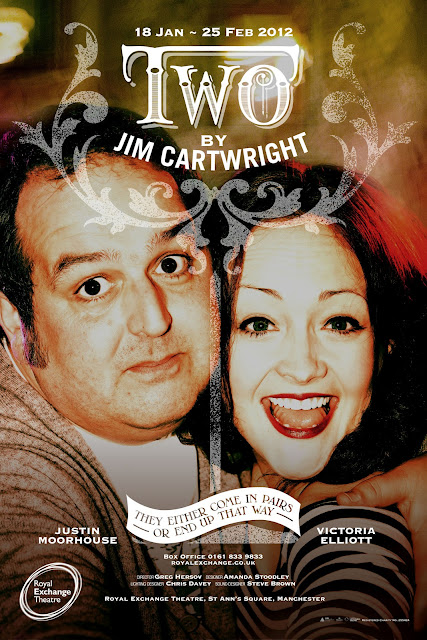 On Friday I had a very cultural day with my lovely friend Kathleen.
We'd put down a visit to the Whitworth Art Gallery as one of our exciting things to do this year.
Its a rather nice gallery but disappointingly there wasn't much open as they were preparing for new displays.
We then headed into the centre of Manchester to eat tea at Tampopo, one of my favourite restaurants, it serves a variety of Asian food so there's a lot of choice.
Then we went to the Royal Exchange Theatre to watch Two, a play by Jim Cartwright.
The exchange theatre is in the round and we had front row, low seats so that we were nearly part of the play. I'd seen both the actors, Justin Moorhouse and Victoria Elliot in plays there before and they are always good. The play is set in a pub with the main characters being the landlord and landlady, the rest of the characters are punters. As there are only two actors they played all the characters which meant impressively quick costume changes and tiny quirks that set the different characters apart.
I felt like I was fully engaging with Manchester
Posted by Helen at 12.2.12 No comments: