This summer I returned to Burkina Faso for the first time in 8 years, it was strange and wonderful. 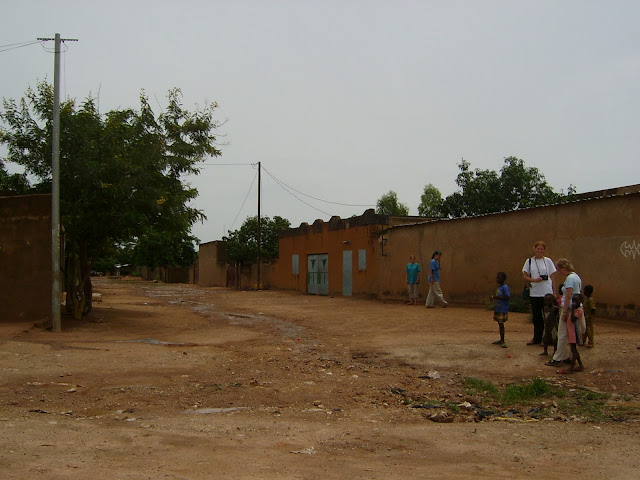 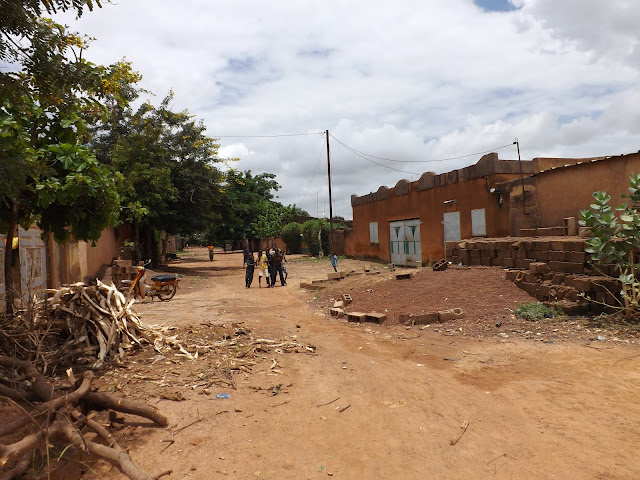 The similar positions of these two pictures is striking given that eight years passed between them, yet perhaps it is inevitable that I should take a picture of this street because the orange building with silver and green doors is the gatehouse to the compound in which I lived in 2004.
In the first picture from 2004 I am in the blue t shirt, seemingly about to walk into the wall while three of the other girls are stood around and talking with neighbouring children. I'm not entirely sure what we would've been doing, perhaps waiting for someone to pick us up and take us somewhere. There are a few trees in compounds but apart from the children who have come out to greet us the street looks very bare, perhaps barren. It was the end of the dry season and very hot, though it looks as if there had been rain earlier in the day.
In the second picture, taken this August a group of older children had come to talk to me. I had wandered over to the street by myself leaving friends in a tailors' in a parallel road. There is a large pile of sand and stacks of bricks outside the compound, this is because the small rented rooms in which we lived back in 2004 have been knocked down and the new owners are building a new house. The tree branches piled to the lift of the street will probably be used for cooking fires.
It felt odd to be back in this street, rue 18.54 and not know my neighbours, not to have my friends just inside our compound. I asked the children if they knew certain people I remembered but they couldn't tell me.
Even though our house is no longer there I'm glad I got the chance to be back in the street again.
Posted by Helen at 30.9.12