I moved to Bradford in 2004 to come to university here and study for a Ba in Peace and Development Studies. I remember very clearly a nice older man at church telling me that it was a bit ironic to come here and study Peace.
In the summer of 2001 racial divisions came to a head in violent riots involving large numbers of police and local residents. The riots and surrounding tensions are sensitively portrayed in a channel four documentary. The 3 years between 2001 and 2004 and the fact that I was aged 16 at the time of the riots meant that I didn't know much about it. In fact I came to live in Bradford having only ever been here 3 or 4 times, it was not a city where I knew anyone, I had no friends or family or any sort of links here.


I found it very difficult at first to live not only away from home but without anyone who was looking out for me. I hadn't really had any fears about being homesick or anything like that because I'd had a gap year and lived in Burkina Faso in western Africa for several months and though I had missed seeing my family and friends and knowing the culture, I was not homesick for them, got on with living in Africa and making friends and enjoying life.
Leaving to go to University was a different experience from this. There was no one around who had to look out for me, no one who would automatically miss me if I was ill, I had a sudden fear of having a stroke in the night and not being able to move or talk and nobody finding me for days.
I'm not naturally the most outgoing of people, those first couple of weeks when you start university are full of introducing yourself and wondering whether these people are going to be your friends, are you making a good impression? do you like them? do they like you?
I found this pretty difficult.
I had also moved from my parents house in relatively peaceful suburbia into a university flat with very little communal area in the city. The neighbourhood where the majority of students live is quite poor, because of this and the amount of students its quite dirty and at times noisy.

Within a couple of months of living in Bradford I'd started to help out at a Salvation Army centre on Holme wood estate a few miles out of the city, coming in to contact with normal, non-student people helped me appreciate the city a lot more.


As I lived here longer I began to fall in love with Bradford
I love the fact that there are so many beautiful buildings, I grew up in a town with very few old buildings left in the centre so this was a lovely change. 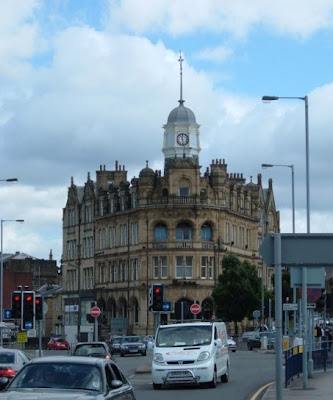 I love the cultural diversity, I love that Bradford has such a rich culture, there are many many languages and traditions and (rather importantly) foods. According to the most recent UK census (via, of course wikipedia) Bradford has the highest percentage of people of South Asian origin in England and Wales apart from Tower Hamlets in central London.
Bradford has an amazing heritage at one point it was the 5th richest city in the world

The overwhelming view of Bradford from people who don't live here is incredibly bleak.
Bradford has double the national infant mortality rate and the highest rate of gun crime in the country. It also has high levels of unemployment and obesity.

Despite these issues I do truly love Bradford
This definitely feels like home to me
and I feel that I've got nothing to fear
Posted by Helen at 24.2.10