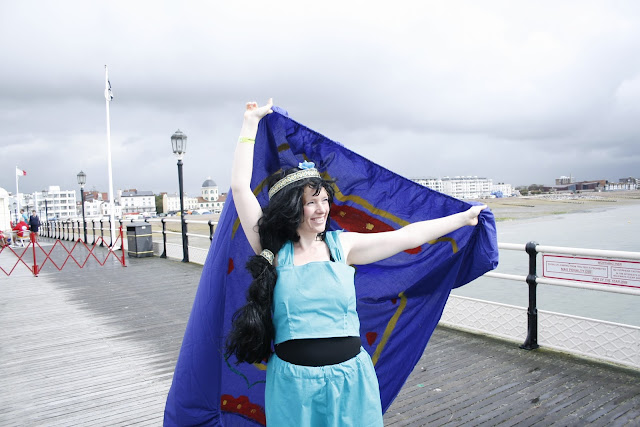 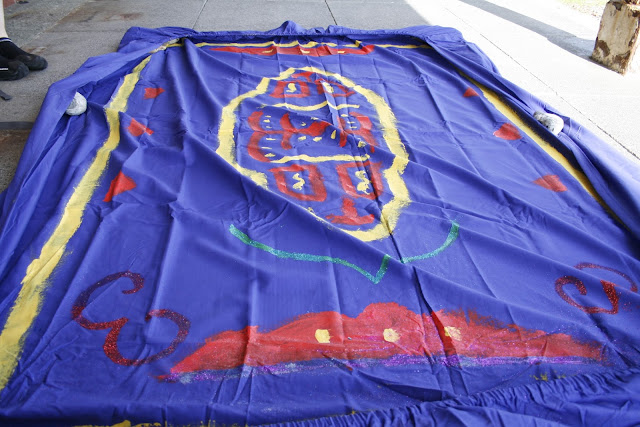 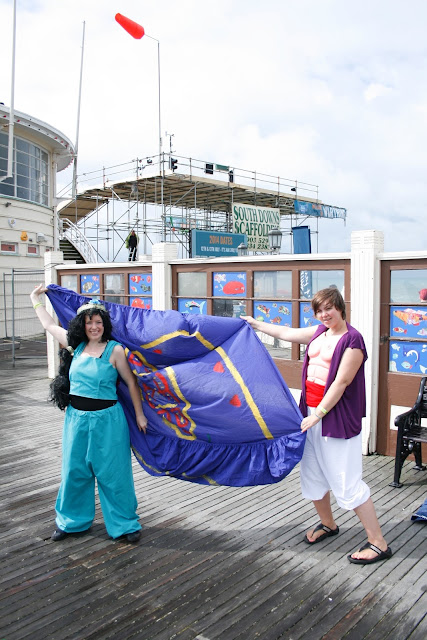 We'd arrived at the pier fairly early on the Sunday morning and the weather didn't look great initially but we prepared our "craft" and got ready for flying anyway.
The sun came out as the day went on, by the time we were due to jump the sun was bright but the winds were very strong. We watched our competitors jump ahead of us, some of whom struggled to actually leave the platform with winds pushing them back.
When it came to our turn to fly we made our way up to the top of the platform holding on to our flying carpet for fear it would blow away! We spoke to the compères and then had to wait before jumping for a good ten minutes as the wind was too strong! The wait was agonizing, I think Kathleen was more worried than I was, we were sat for the whole time waiting so it didn't actually feel like we were that high up.
After being given the go ahead we pranced around for a little while dancing to our chosen music ( of course we had picked "A Whole New World" from Aladdin) we had a couple of  visual gags such as holding up a small globe when the song says "I can show you the world" because we think we're both pretty hilarious! 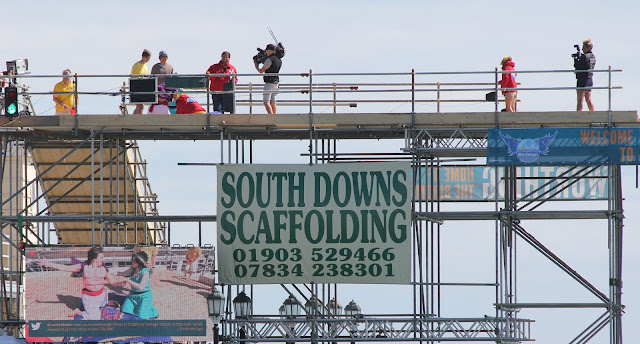 Then Kathleen poked me and we both ran to the edge and leapt. 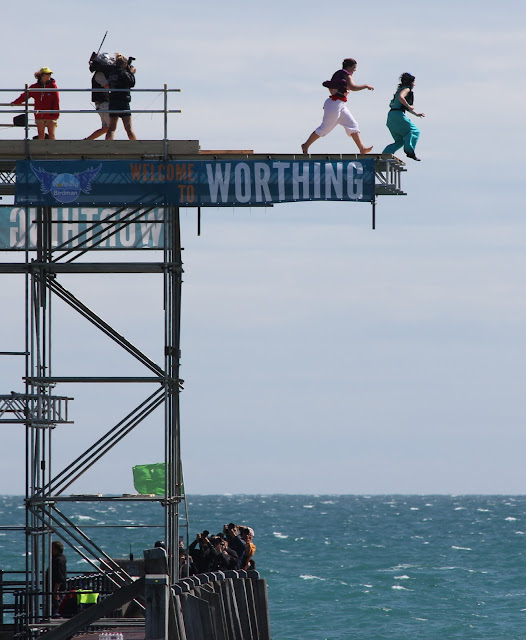 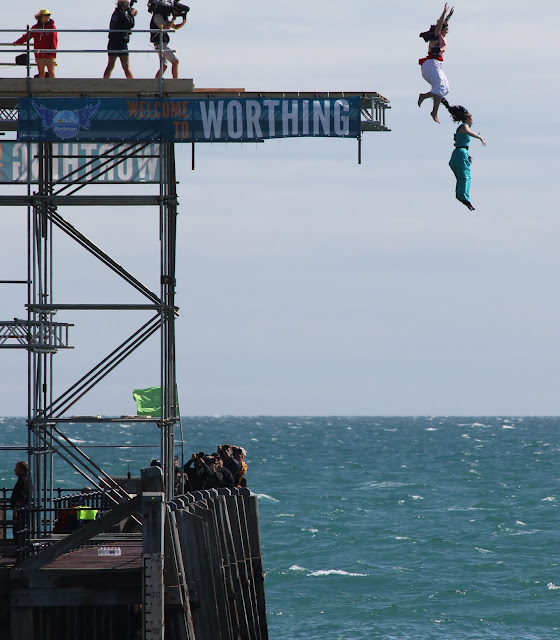 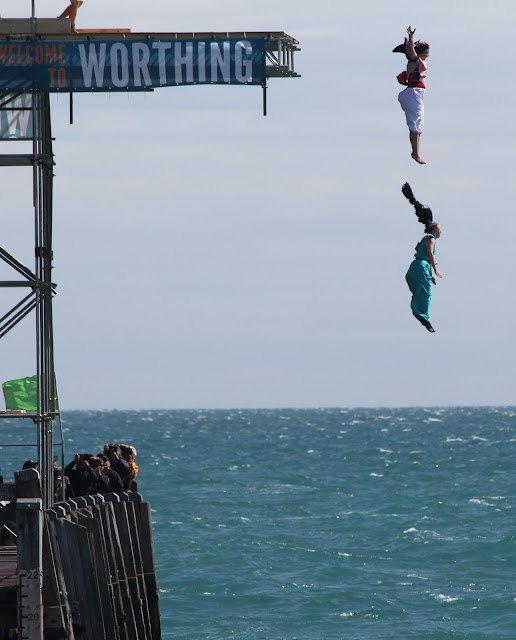 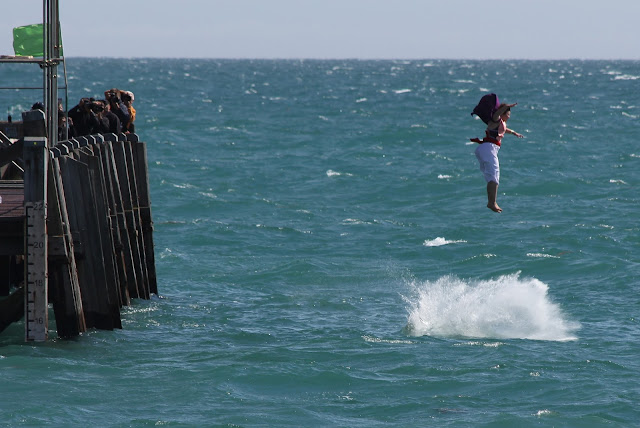 It was terrifying, the feeling of no longer having something solid beneath your feet, that the ground had simply disappeared was completely odd.
It felt like I was falling for ages, I remember screaming as I left the platform, running out of scream and still falling for what felt like several more minutes.
I hit the water fairly straight apart from having my arms out instead of straight by my sides as advised which smarted a lot. I had a couple of seconds panic under water with a mouth and nose full of sea and my face covered by my ridiculous plastic six pack before I surfaced. 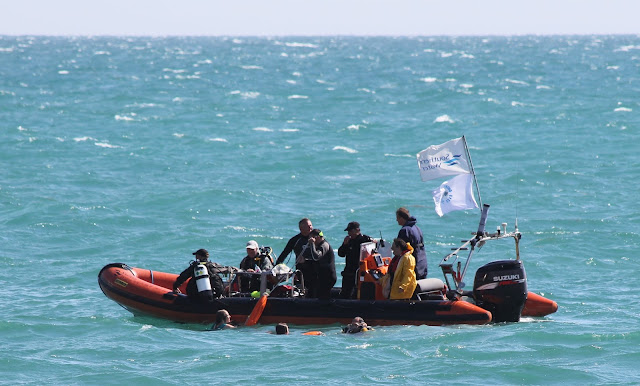 The rescue boat came to meet us quickly and as soon as I reached it I couldn't stop giggling. The massive adrenaline rush and joy at being alive and no longer hurtling through the air meant I had uncontrollable giggles until I had to transfer from the boat onto a board on the back of a jet ski, being dragged through the water I had to close my mouth or have it fill again with water!

Though I'm quite pleased that I've done it, there is no way that I'd want to do this again. I think it was the feeling of falling that was worse than actually hitting the water. People kept telling us that the water wasn't too cold and would be fine but I'd never had any fears about that. Kathleen and I regularly swim outdoors in Salford Quays and I'd swam the previous day in the sea so that wasn't an issue but actually leaving the security of the solid platform and trusting you'd survive was awful.

The last six pictures come courtesy of John Topman whose amazing photos are on flickr
Posted by Helen at 1.9.13